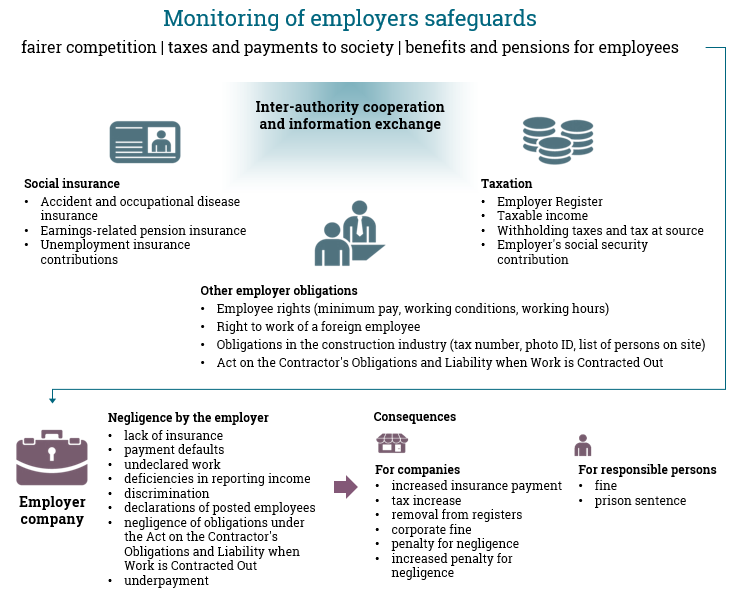 Source: The Division of Health and Safety of the Regional State Administrative Agency for Southern Finland

In 2019, the immigration control team of the Regional State Administrative Agency for Southern Finland conducted a total of 847 immigration control operations in Southern Finland. The operations focused on verifying that foreign employees had the right to work and that their employment contracts complied with the minimum terms and conditions laid down in Finnish law.

In 2019, the number of tips related to immigration control in Southern Finland doubled compared to 2018. In 2019, more than 440 tips useful for control purposes were received in total, while in 2018 the corresponding number was 220. Most of the tips were received from other authorities working with the employment of foreigners in Finland. Most of the tips came from the construction and restaurant sectors – the number of tips from the construction sector, in particular, more than tripled compared to 2018.

Non-compliance with minimum terms and conditions for foreign employees

Another key issue that immigration control operations in Southern Finland focus on is the supervision of compliance with minimum terms and conditions in the employment of foreign employees. It assesses whether the employer complies with the Finnish employment legislation with regard to the wages of the employees. In 2019, attention was also paid to whether employers observed the principle of non-discrimination.

An ongoing challenge in immigration control operations is the verification of employees’ actual working hours. In 2019, many operations revealed that the employer had not kept a record of the working hours of their employees as required by the Working Hours Act. In such cases, it is difficult for the inspector to establish whether or not the minimum terms and conditions are being met in the case of a foreign employee, as the wages paid to the employee cannot be compared to the actual number of hours worked. The largest number of deficiencies related to keeping a record of the working hours as required by the Working Hours Act were found in the restaurant sector, where deficiencies in the record of the working hours were found in 70 per cent of the inspections.

In 2019, supervision of the minimum terms and conditions of foreign employees in Southern Finland was successful, as evident from the high number of administrative hearings, decisions and pre-trial investigation reports.

Under the Act on Posting Workers laid down in 2016, an administrative negligence fee may be imposed in cases where the law has been broken. Deficiencies detected during the monitoring of posting companies in Southern Finland have led to the initiation of a negligence fee process in several cases.

New phenomena in the field of immigration control

In 2019, inspectors came across situations in which they were told that the person working on the site was not in an employment relationship with the employer. In such cases, the inspector may, based on the findings of the inspection, deem that the criteria of an employment relationship are met for the person in question. Most of these cases concerned the restaurant industry. Some of these findings are the result of the increased number of unannounced visits, which shed better light on the actual situation at the workplace. The more extensive rights of occupational safety and health authorities to information by law has proved helpful in resolving such situations. For example, it is possible to utilise information provided by another authority to verify whether an employee has at any point been paid wages by the employer on which taxes have been paid. In the restaurant sector, a guideline on the characteristics of an employment relationship was given in more than 6 per cent of the inspections in 2019. In 2018, the same number was 3 per cent (Figure 4).

Slightly fewer asylum seekers were encountered than before

Inspections carried out in collaboration with other authorities

Immigration control in Southern Finland conducted 284 joint visits with other authorities in 2019. As in previous years, the most important authorities acting as partners were the police, the Border Guard and the Finnish Tax Administration.

The police were involved in about 210 visits. Almost one half of the joint visits with the police were targeted at restaurants; these visits were unannounced. The number of joint visits with the police has decreased somewhat compared to the two previous years. This is at least partly due to the fact that in immigration control, more attention than in the previous years has been paid to the accuracy of the targeting of control instead of simple quantitative goals. The presence of the police at inspections was very useful from the perspective of the occupational safety of inspectors and verifying the identity of the employees encountered.

The Contractors’ Obligations and Liability Act protects against the shadow economy

Source: The Division of Health and Safety of the Regional State Administrative Agency for Southern Finland

In 2019, monitoring was especially targeted at the construction industry, industrial sector, logistics, the service industry, joint municipal authorities, and foreign contractors. In total, slightly under 1,600 inspections of contractor’s obligations and liability were carried out in 2019. Of those inspections, roughly 1,500 were completed by 23 March 2020. Inspections of contractor’s obligations and liability were used to monitor the compliance with the obligation to check a total of about 6,000 contracting partners who had concluded a contract for the use of leased workers or subcontractors (Chart 1).

The monitoring was carried out in close co-operation with the Finnish Tax Administration, Finnish Centre for Pensions, and other authorities; and the Occupational Safety and Health Authority utilised the information obtained from them in the inspections. More specifically, the Occupational Safety and Health Authority had extensive access to the contract information and employee data of the construction industry, as well as to the obligation compliance reports of the Grey Economy Information Unit provided by the Tax Administration. Improved access to information enabled more specific targeting of monitoring to contracts for the use of subcontractors and leased workers, in which the company performing the work has failed to fulfil its statutory obligations.

According to the monitoring observations, awareness of the contractor’s obligations and liability when work is contracted out was more extensive in the construction industry than in other sectors. Large construction industry operators in particular go beyond the minimum requirements set forth in the Contractor’s Obligations and Liability Act in their worksites, whereas failure to meet the Act's minimum requirements is still common within subcontracting chains.

The imposition of a negligence fee was considered as the result of roughly 100 inspections: most of these involved foreign contractors and construction companies (Chart 3).

A negligence fee may be imposed if:

1. the contractor has neglected his obligation to check information

A negligence fee may be imposed if:

3. the contractor has made an agreement of the type specified in the Act on the Contractor’s Obligations and Liability when Work is Contracted Out, even though the contractor must have been aware that the other party to the contract does not intend to fulfil his statutory payment obligations as the contracting party and employer

In most cases, the basis for considering the imposition of a negligence fee is the contractor having neglected his obligation to check information. As the result of the inspections made in 2019, the imposition of a negligence fee was considered in 14 cases on the basis that the contractor must have known that the other party did not intend to fulfil his statutory payment obligations as a contracting party and employer. Such cases often show signs of underpayment and underpricing. Compared to the monitoring observations made in 2018, the number of cases in which a negligence fee was considered on the basis of underpayment and underpricing has increased, in contrast to increased compliance with checking obligations.

One of the statutory tasks of the Finnish Centre for Pensions is to supervise earnings-related pension insurance. It supervises insurance taken out under the Employees Pensions Act and the Self-Employed Persons’ Pensions Act. Ensuring that employers and the self-employed have equal responsibilities with respect to the insurance obligation promotes equal competition between companies and prevents the shadow economy. Supervising insurance also helps pension providers administer the insurance and collect pension contributions, which helps secure the funding base of the earnings-related pension scheme. By supervising pension insurance, the Finnish Centre for Pensions also makes sure that employees and the self-employed get their statutory pensions.

As a rule, employers meet their pension insurance obligations. The results of the supervision of earnings-related pension insurance have been quite consistent in the 2010s (Figure 1). On average, the uninsured wages have amounted to about 110 million euros each year. These errors account for about 0.2 per cent of the total insurable wage sum under the Employees Pensions Act.

No major changes in the figures for supervision were to be observed. In 2019, the supervision mainly covered the surveillance material for 2018, so the possible effect of the Incomes Register is not yet visible in the supervision statistics.

Figure 3 shows that a total of 1,183 self-employed persons were examined in more detail. The number was lower than in 2018 since, due to IT changes, the annual handling of data from the Tax Administration on persons practicing a profession, entrepreneurs and shareholders in business partnerships was postponed to the beginning of 2020.

In 2019, the insurance of persons receiving a wage via an invoicing company were supervised (around 800 of a total of 28,000 potentials). The supervision is still partly ongoing, but it has proved useful. Already 300 entrepreneurs using an invoicing service have taken out insurance under the Self-employed Persons’ Pensions Act after being contacted by the Finnish Centre for Pensions.

Other supervised self-employed persons included individuals who popped up through occasional surveys or in connection with the supervision of employers.

Ignorance is often the cause for not having insurance

The supervisory obligation of the Finnish Workers´ Compensation Center (TVK) is based on the Workers’ Compensation Act.  Mass monitoring by TVK covers all employers in Finland, and it was started in 2016.

The majority of the investigated cases do not involve negligence. These cases end up being investigated due to record errors, which include payment type errors in reports submitted to the Tax Administration and errors in insurance register materials (Figure 1).

The employers who have neglected their insurance obligation are a heterogeneous group comprising not only Finnish companies but also foreign companies and household employers (Figure 2).

The companies were divided across different sectors, had often operated for several years, and were mostly in the under EUR 400,000 turnover categories. Trade was the most common sector, just above others. Figure 3 does not include household work that, as a rule, comprised childcare, domestic help, renovation or housebuilding work.

The Unemployment Insurance Fund and Education Fund merged on 1 January 2019 to form the Employment Fund.  The merger did not change the tasks of these funds. The Employment Fund handles the funding of earnings-related unemployment benefits, the collection of unemployment insurance contributions and granting of adult education benefits.

Most cases of neglect and errors in reports are due to human error. In particular, there is a lack of awareness about the requirements for reporting on the wages of partial owners and self-employed persons as well as the preconditions of other payment obligations. The Employment Fund seeks to prevent such situations by providing guidance and advice to employers on issues related to insurance payment obligations and the preparation of reports.